Researchly’s Industry Sentiment tool for last week (22.07.2018 – 28.07.2018) shows, like the week before, the typical high around Prices and Markets and Regulations. Also like last week, new products and companies were launched and announced, especially in regards to enterprise blockchains. Finally, there was a lot of talk around ETFs, originating from the SEC’s decision to (again) reject the Winklevoss’ ETF. As an extra section, I am including Funding and Investments. 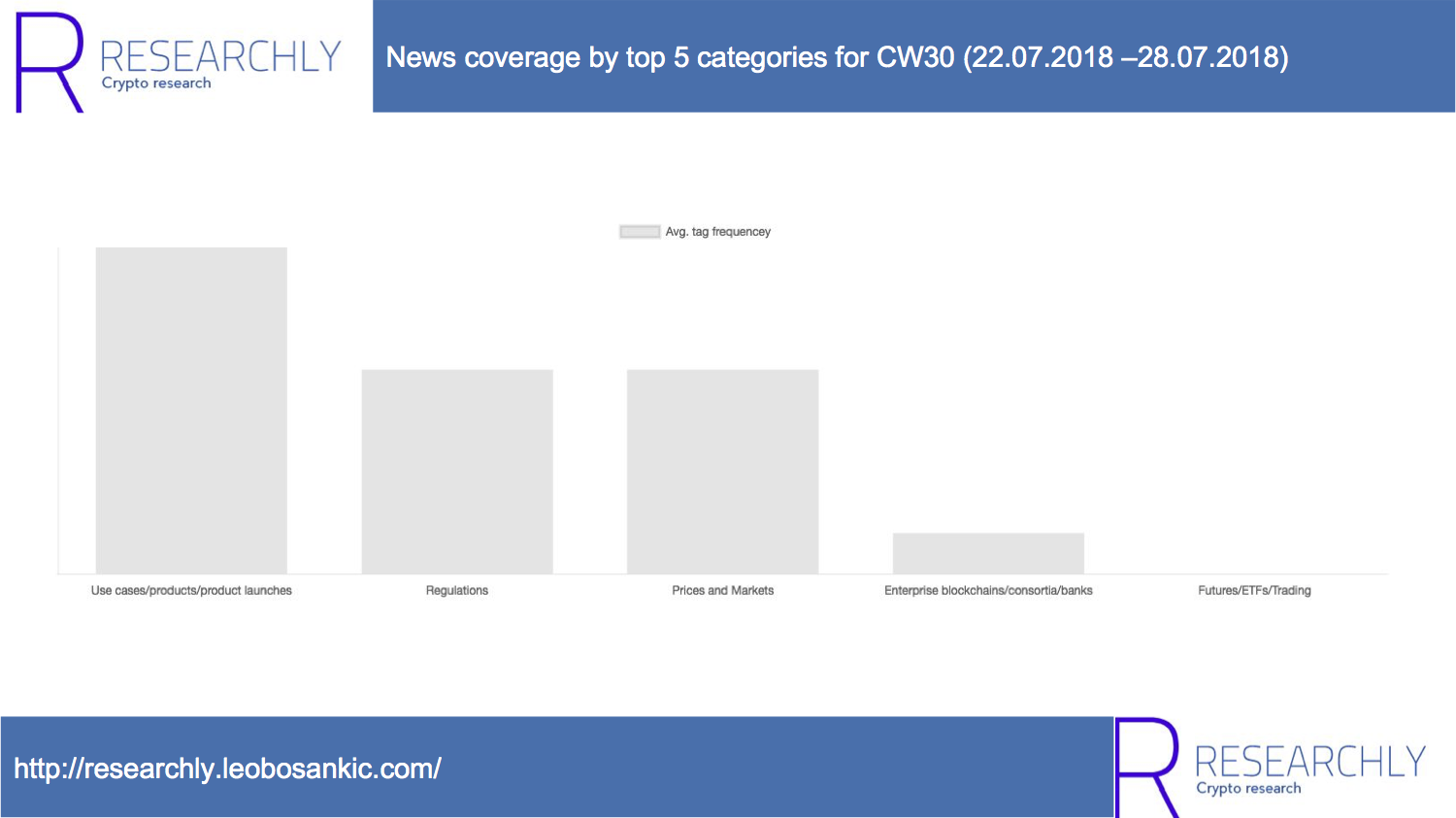 Full Analysis: Why Coinbase and not Bitcoin will replace Mastercard

As reported in last week’s dapp report and the dapp report of the week before Gambling and Games were the most popular Dapp categories. And the media picked up these Ponzis last week.

Full Analysis: What Ponzis teach us about society’s responsibility and technological progression

Google wants to bring blockchain technology to its cloud services
by partnering with New York-based startup Digital Asset. (theverge)
It looks like they are working on a web-based solution for developing and testing Blockchains applications. Interestingly, two weeks ago Sparkster, a similar service, finished their ICO and raised $30Mio. Sparkster is a Drag and Drop Software Development platform to “Build Software with NO CODE”. Although I have argued my skepticism against Sparkster in Blockchain Report CW28: Some dapps, no ICOs, many wars, I am generally in favor of tools that enable easier development.

From Blockchain Report CW28: Some dapps, no ICOs, many wars regarding Sparkster:

Sparkster has raised $30,000,000. A lot of buzzwords, no working product and I am in general suspicious of Drag and Drop software tools, especially when writing blockchain-based apps with code is still in its early days.

The First Augur Assassination Markets Have Arrived (Coindesk)
Shortly after the launch of Augur, you can now bet on the lives of selected individuals on Augur. Like in the case of Ponzis, they were bound to happen and we will have to see how they will be regulated. Also, it will be interesting to see how – and if – governments will react.

Crypto Security Startup BitGo to Custody Zcash. (Coindesk)
This is an extension to last week’s news when BitGo added 57 Ethereum Tokens to their custody solution. As I have written in last week’s report, the crypto custody space is getting more and more competitive:

Coindesk reported that Ledger plans to add 100 tokens to their custody service by 2020.

In the retail investor section, Robinhood has added Litecoin and Bitcoin Cash to their app. Although this sounds as yet another product announcement I believe it to be an important part of the ongoing exchange wars, especially as Robinhood has zero trading fees.

Consulting Giant Accenture’s New Patent Reveals Plans for Blockchain Logistics Innovation (cointelegraph)
Admittedly, it is just a patent. But it is Accenture and its a patent for Supply Chains. Two topics that keep popping up. Unsure if that’s good or bad.

Prices and Markets and Futures/ETFs/Trading

A lot of talks again about Bitcoin. After being bullish for the first part of the week and reaching a two-month high at $8,507 on Tuesday, it fell beyond $8,000 on Thursday most possibly because the SEC rejected Winklevoss’ bitcoin ETF.