See the slide deck or read the full report below

Alternatively, there were 6 finished ICOs with a total investment volume of $31,487,000 also across three industries because Loandex seems to have shut down. Indicators are an unreachable website and twitter-profile.

This week’s investment volume is considerably lower than the $226.438.792 last week. However, if we discount the $200.000.000 EOS ICO, then the figures become more alike. Nevertheless, there were three times more ICOs last week (22 last week).

See the full ICO list at the bottom of the page. 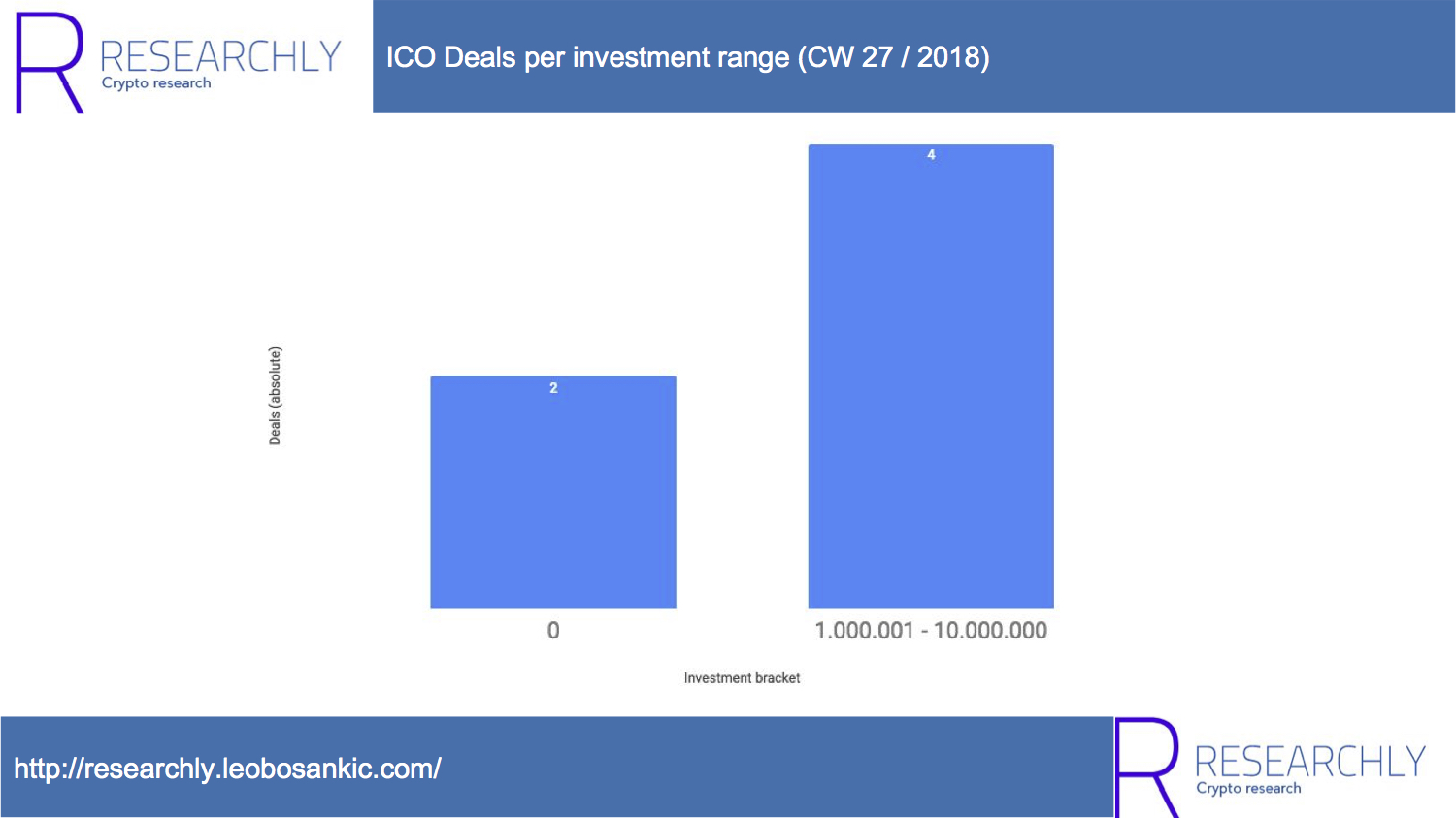 Due to the low amount of data, conclusions are difficult here, but for what it is worth Cryptocurrency trading and investing received the most deals (4 or 67%) but only 50% of the total investment volume. The remaining 50% ($15 Mio.) were split across Digital Asset Management and Identity. 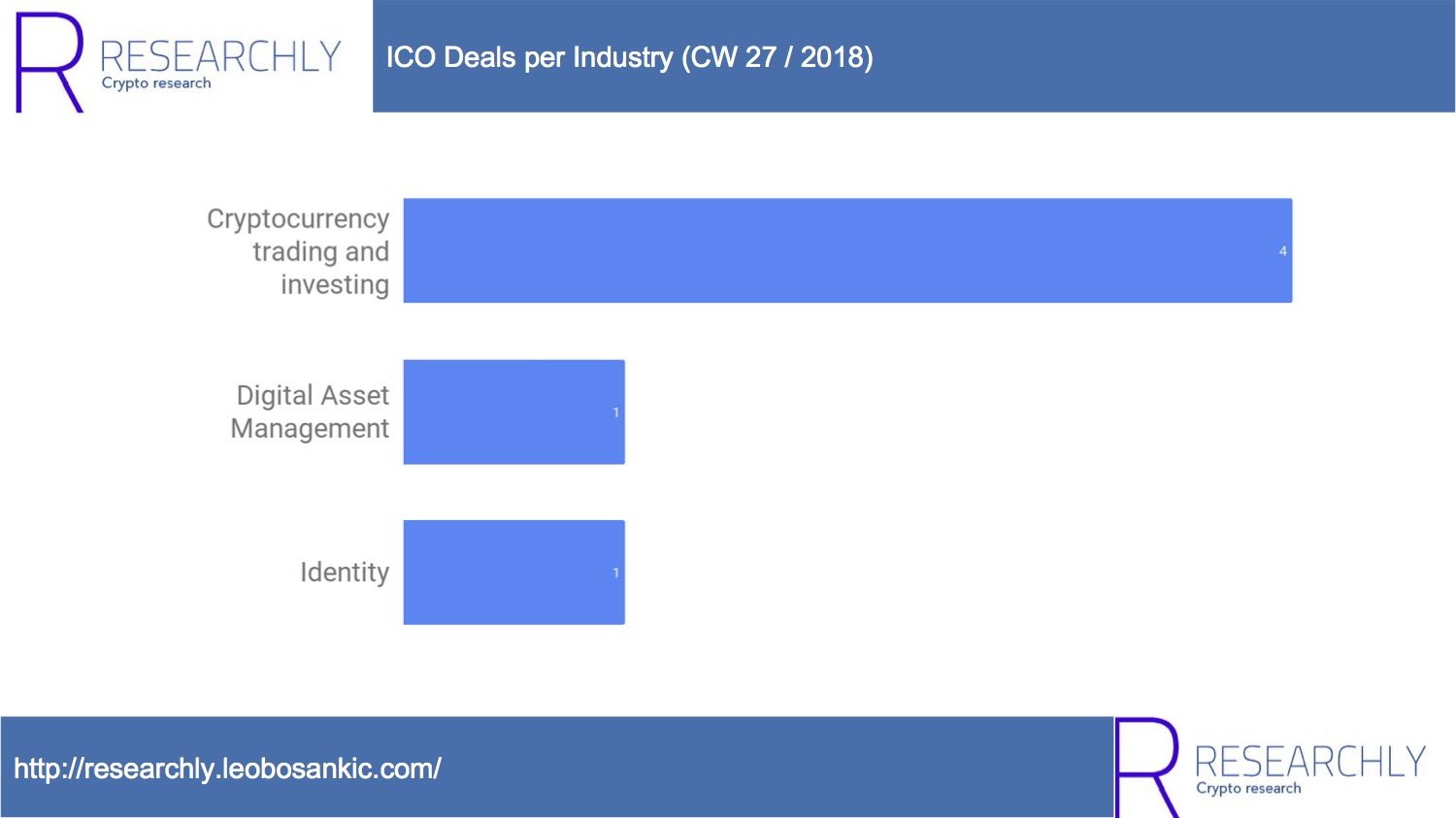 Nevertheless, I included the industry breakdown because I consider it a solid representation of the overall state, namely that a lot of activity happens around the building blocks. Furthermore, I believe that their repeated appearance following last week’s report is further supporting their relevance. As such, Identity projects were not only present in last week’s report but have in general been receiving attention since the early days of Bitcoin. Having ICOs in the „Cryptocurrency trading and investing“ industry shouldn’t neither come as a surprise because they are one of the most basic tools. „Digital Asset Management“ is similarly essential. Below it is explored in more detail.

Among other things, with Digital Asset Management I refer to the issuance of asset-backed, non-fungible tokens using blockchains. Another term is tokenization.

This week there was only one addition; 0xcert Protocol. Whereas for Invox and Equi Fund tokenization is a means to an end, 0xcert Protocol is a – yes – protocol whose sole purpose is tokenization. TrustToken, who follows a similar strategy (although no protocol and not open-source), recently raised $20 Million in their token-presale, among others by a16z. Although I have looked into over 60 blockchain startups working on tokenization, 0xcert Protocol was not part of it. Thus, unfortunately, I cannot say more about it. If you can, I would be happy to hear from you.

From an ICO perspective, there are only a few takeaways. Despite the small number of ICOs, I believe that the appearance of ICOs from Digital Asset Management, Cryptocurrency trading and investing, and Identity is telling about the industry’s direction, namely that people are working on the building blocks.

Also, although Loandex’s (possible) shut down was a single occurrence, I still consider the presence of such „(possible) shutdowns“ (not calling it a scam, [yet]) to be the rule and not the exception. I am looking forward to seeing this trend reverse.

Moreover, I consider the small number of ICOs not necessarily negative; interest in the industry seems to be still present, but it appears to have shifted from “ICOin” to building.

The emphasized seems leads to the final conclusion; although pure funding data is important, it shows only part of the picture which makes such reports only partially useful. Therefore, more qualitative data will be included next week.

If you want to share such data with me (e.g. news or new products), I would be happy to receive it:
contact@leobosankic.com